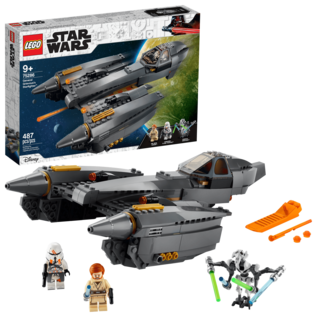 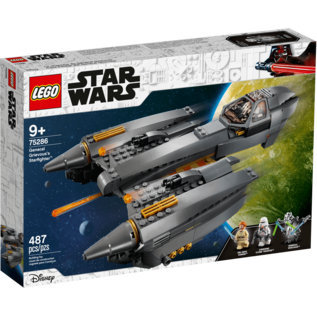 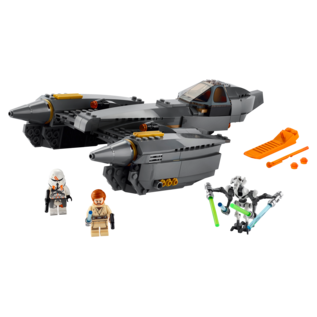 Get set for an epic clash between General Grievous and Obi-Wan Kenobi! The powerful warlord Grievous is flying into battle in his awesome starfighter. Look out for the spring-loaded shooters. When the starfighter comes in to land, use Obi-Wan’s Lightsaber and the Airborne Clone Trooper's blaster to challenge the warlord. Who will win this thrilling Star Wars: Revenge of the Sith battle? You decide!

• Kids can stage epic General Grievous vs. Obi-Wan Kenobi battles with this construction playset featuring General Grievous’s Starfighter (75286) from Star Wars: Revenge of the Sith.
• This awesome building toy for kids includes 3 LEGO® Star Wars™ minifigures – General Grievous, Obi-Wan Kenobi with a Lightsaber, and an Airborne Clone Trooper with a blaster – to role-play fun, creative stories.
• General Grievous's Starfighter features an opening LEGO® minifigure cockpit, 2 spring-loaded shooters and retractable landing gear to spark fans’ imaginations as they play solo or share the fun with friends.
• There are lots of ways to play with this 487-piece set, making it a great birthday present or holiday gift for boys and girls aged 9+ to introduce them to LEGO® Star Wars™ building toys or expand their collection.
• This construction model measures over 3” (8cm) high, 11.5” (30cm) long and 6.5” (17cm) wide. Fans can also fly it in the LEGO® Star Wars: The Skywalker Saga video game.
• No batteries required! This popular LEGO® Star Wars™ spacecraft building toy is powered by kids’ imaginations, so they can use the starfighter and LEGO minifigures to play out the best galactic adventures.
• Thinking of buying this spacecraft building kit for a Star Wars™ fan who is new to LEGO® sets? No worries. It comes with illustrated, step-by-step instructions so they can build independently and feel Jedi-level awesome!
• There are LEGO® Star Wars™ sets to delight fans of any age, whether they want to recreate classic action from the saga, role-play their own stories or simply build and display the spectacular construction models.
• Ever since 1958, LEGO® bricks have met the highest industry standards, which ensures they are consistent and connect and pull apart easily every time – no need to use the Force!
• LEGO® bricks and pieces are tested in almost every way imaginable so you can be sure that this Star Wars: Revenge of the Sith building set meets the highest safety standards here on planet Earth – and in galaxies far, far away! 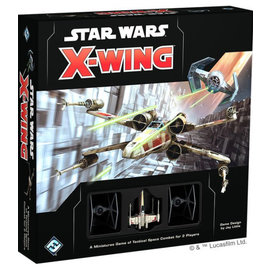 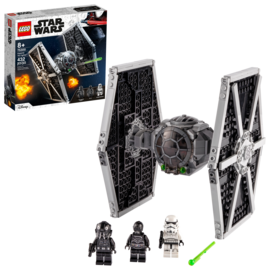 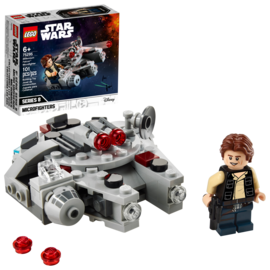