Young adventurers will adore the LEGO® Creator 3in1 Space Mining Mech, which can be rebuilt into a cargo carrier or space robot toy. 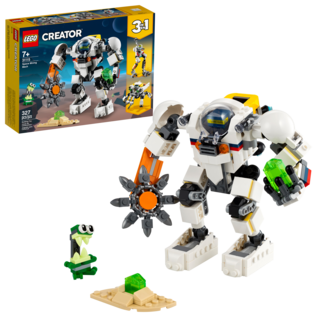 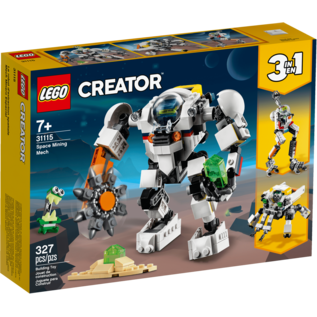 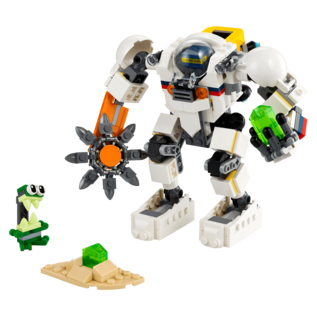 Experience out-of-this world space adventures with the brilliant Space Mining Mech! Use the buzz saw to search for valuable crystals and store them in your jetpack. Watch out for the pesky green alien! Later, rebuild the mech into a cargo carrier or a posable mech piloted by a robot for more intergalactic action – or dream up something totally new! The choice is yours with this amazing 3in1 set.

• This LEGO® Creator 3in1 Space Mining Mech (31115) building set lets imaginative kids build any of 3 exciting models: a mech toy, cargo carrier and space robot toy.
• The Space Mining Mech model includes a green alien figure and a set of crystals to add an extra dimension to kids’ adventures in space.
• Creative kids can use the mech toy to compete with an alien for crystals, or zoom around the galaxy in a 4-legged cargo carrier, or fight space battles with a 2-legged mech.
• The posable Space Mining Mech comes with a buzz saw, a jetpack and a face that can change expressions, while the 4-legged cargo carrier and 2-legged mech each feature a robot pilot.
• With 327 pieces, this LEGO® Creator 3in1 set is a rewarding build for passionate space fans aged 7 and up and makes the perfect birthday or holiday gift.
• This mech toy stands over 6 in. (15 cm) high and is a great portable size to play with at home or on the go.
• Create even bigger adventures with other LEGO® Creator 3in1 sets: Wild Lion (31112), Race Car Transporter (31113), Superbike (31114), Safari Wildlife Tree House (31116) and Surfer Beach House (31118).
• LEGO® Creator 3in1 sets let kids enjoy endless imaginative play as they create action-packed stories around the 3 different cool and colorful models in every box.
• For more than 6 decades LEGO® building bricks have been made from high-quality materials to ensure they consistently connect and pull apart every time.
• LEGO® building bricks meet stringent global safety standards.