Star Wars: The Mandalorian fans will love this LEGO® brick version of Boba Fett’s Starship and a transport vehicle for play and display. 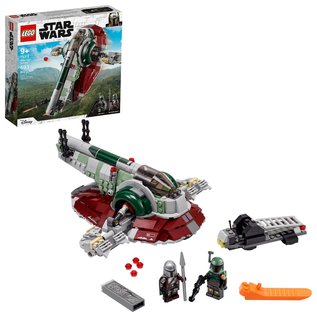 Build Boba Fett’s signature starship and play out exciting missions with The Mandalorian! Jump into the cockpit and launch a bounty-hunting mission. Fire the stud shooter, target enemies with the rotating dual blaster cannons and freeze them in Carbonite. Land in Tython and use the transporter to move the starship (or display it in an upright flying position).